Collaborate; work jointly on an activity, especially to produce or create something.

As I headed home on a way-too-cold spring evening, I saw a vehicle stopped in the MSSPA driveway at 279 River Road in Windham, blocked by the chain, yet needing attention. A car door was open and I could see a young person outside the vehicle and an older man walking towards the Society’s barns. I stopped to ask what the need might be. The story was heart-breaking, the cats in the car were beyond that.

The older gentleman, a disabled, WWII combat veteran, with tears on his face, told a story of loss of his home, transition to a hotel for the homeless, and extreme sadness at the fate of the cats; they couldn’t go with him. The cats had to be re-homed or abandoned. The younger man, his grandson, looked on and listened to the story, becoming teary-eyed as well. Because MSSPA focuses its efforts on horse rescue, rehabilitation, and re-homing, I knew it wasn’t the place where these kitties would be best served. Even though it was 6:30 p.m., well past their closing time of 5:00 p.m., I called the Animal Refuge League of Greater Portland and was met by the cheery voice of Lynne Cooper, Guest Services Manager. Could the blessing have been greater? Not possible.

Not familiar with the area, the older man and his grandson followed me to Landing Road in Westbrook where our little caravan was met by the ARLGP’s team of professionals – each one able to look beyond the immediate and horrific circumstances. As Lynne directed the team, unloading crate after crate of cats, including “Ginger,” who in the filth and chaos of her unchosen circumstances had given birth to several kittens during the trip, there was no judgment. Each team member was professional, sympathetic, and reassuring that surrendering the cats was the right thing to do, a kindness. The older man and his grandson were thanked for helping their cats to a future where each cat would be properly cared for and their needs met.

Eventually, I went home to my own two adored cats and spent the rest of my evening wondering what I could have done without the support of our friends at the ARLGP. I know now that the League’s response team was on-site for several hours addressing the acute care needs of the 11 adult cats and several newborn kittens. All of the cats were intact, had never been seen by a vet, never had any vaccinations, and were living in appalling conditions without enough food or care. The upside was that the cats, though frightened by the relocation and travel, were friendly and not feral. The downside… well, there isn’t a downside any longer. These cats have joined the others fortunate enough to receive services at the Animal Refuge League of Greater Portland; their futures are secure and their fast track to hell has been re-routed to good homes and new, loving families.

Non-profit businesses operate in a very competitive environment. Every fundraising dollar counts for the most important of missions, from environmental causes to educational enterprises and social services of every stripe. When organizations who could compete choose instead to collaborate, donations are maximized and the greatest good is achieved with extreme efficiency. Non-profits supporting one another produces a stronger safety net for those we serve.

Thank you to those who support local charities like the ARLGP and the MSSPA. Your gifts, enhanced by our collaborations, help create the world we all wish for.

Oh, yes, and the kittens couldn’t be cuter! 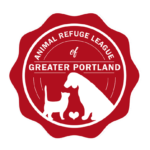 MSSPA works with the ARLGP and others to create an environment where all animals receive what they need and produce a better world in which everyone may live with dignity.

If you would like to make an in-kind donation of horse-related items, thank you! Please contact the shelter by phone or email for more information.