If you would like to support Silver, Annie, and Sienna (previously Phoebe), a compassionate gift of any amount is greatly appreciated to support their return to the wild.

Give To Support the Mustangs

The Maine Three are Skydogs Now!

Check out the latest piece by Peggy Keyser and Kirk Cratty Photojournalist on NEWS CENTER Maine’s 207 about the Maine Three’s life-changing trip to Skydog Sanctuary.

If you missed the daily updates, you can go back and see Annie, Silver, and Sienna’s life-changing journey on the MSSPA’s Facebook and Instagram. Check out MSSPA Assistant Barn Manager Madi’s recorded Facebook Live videos to see what each day on the road was like for the mustangs.

Learn how Silver, Annie, and Sienna came to the MSSPA and why returning them to the wild was the best option to see these mustangs thrive. 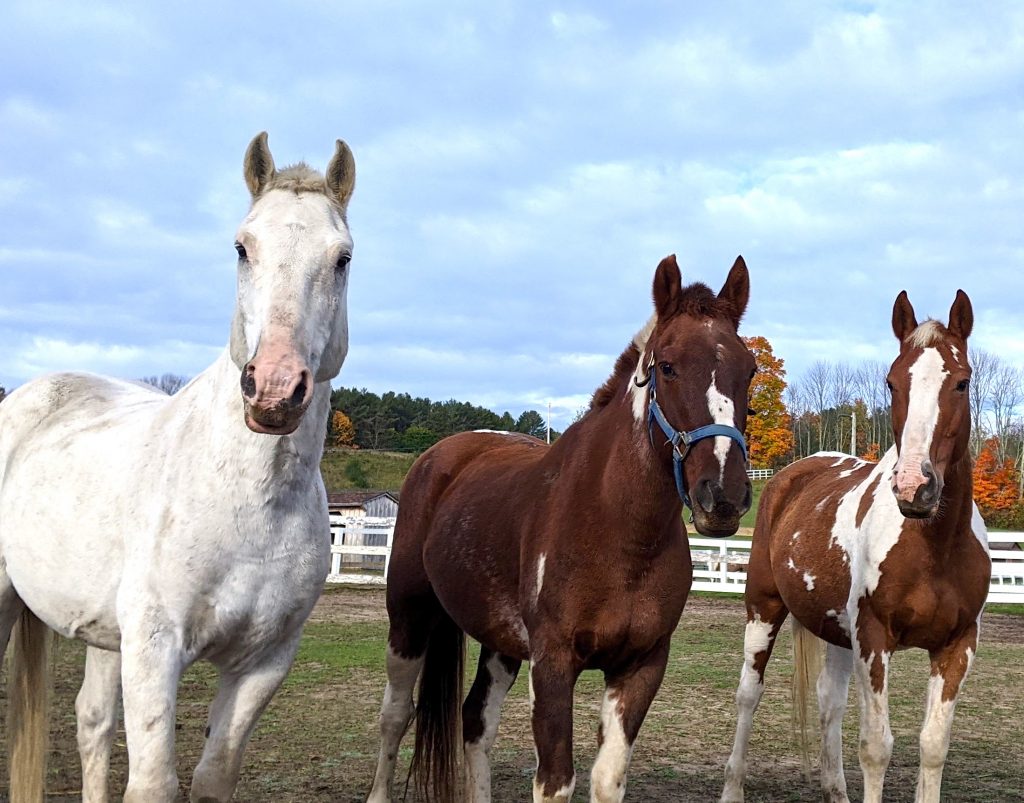 Mustangs, commonly referred to as wild horses, are descended from domesticated horses brought to North America by the Spanish. The U.S. Bureau of Land Management is tasked with the management of America’s mustangs and wild horses. Each year, thousands are rounded up, primarily in the western states, including Nevada, Wyoming, Idaho, Colorado, and others.  Helicopters, ground vehicles, and horseback riders are used to herd them into small corrals for population control and future disposition. 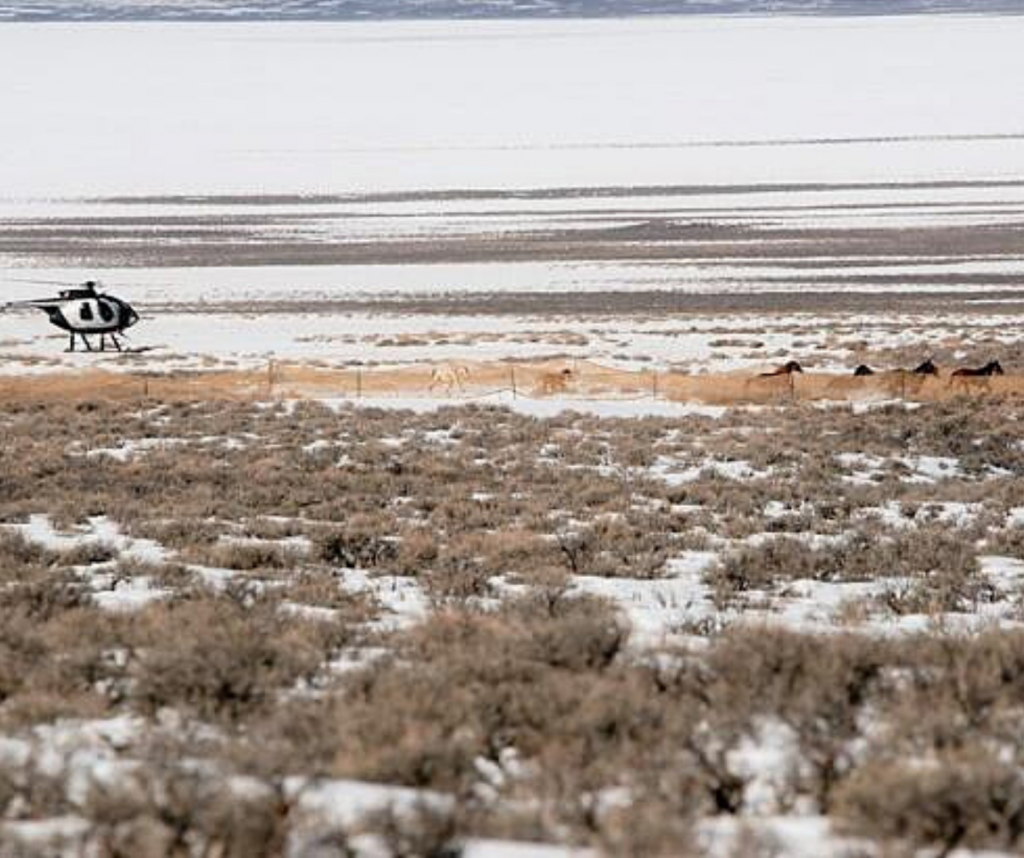 During the roundups or gathers, many horses are injured, and some die from exhaustion. Once caught, a small number of horses are adopted and a very large number are sold, ending their days in slaughterhouses in Canada and Mexico. Due to their sheer numbers, it is extremely difficult for the BLM to provide adequate care for the animals in their holding facilities. Individuals who adopt or purchase them are not often able to handle these wild horses, many of whom have never seen a human before being rounded up. 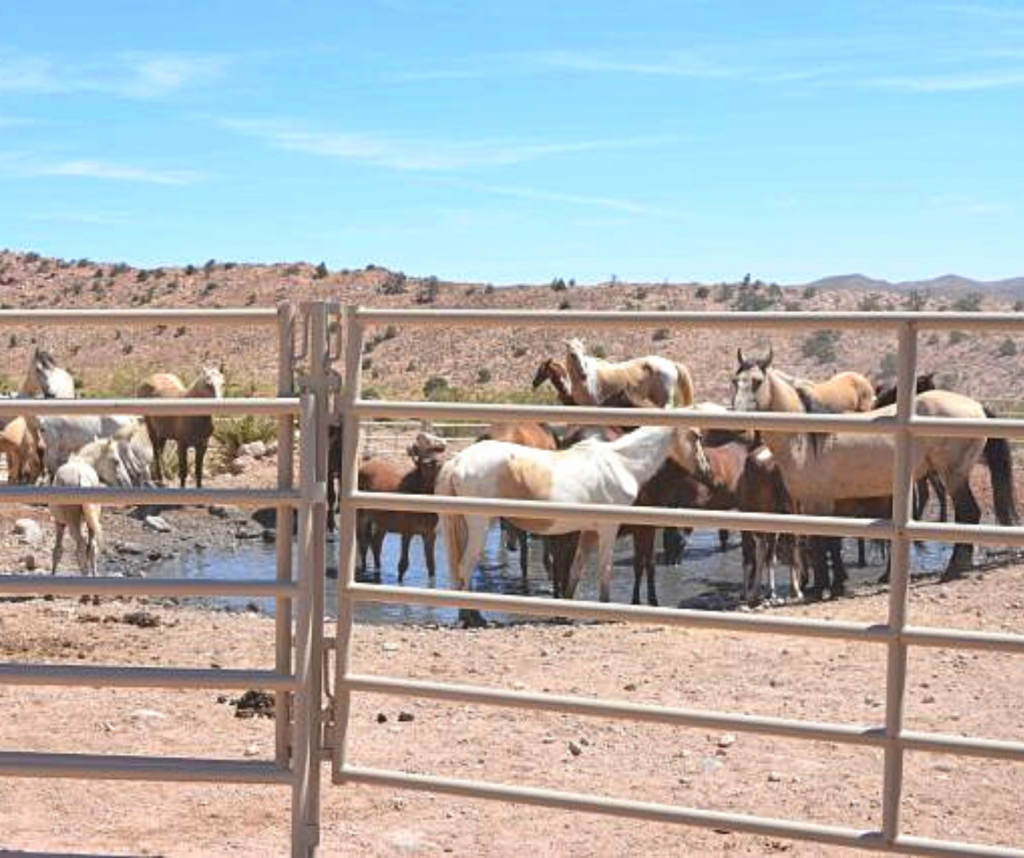 Younger wild horses are more curious about people; they are more easily gentled and trained. Older mustangs are less interested in humans and have fully developed self-preservation skills. Mustangs over the age of 10 less readily accept domestication. Mature wild horses may not thrive in captivity. Keeping them penned up for no purpose is cruel. It is like a roadside zoo with bears, big cats, or reptiles who do not belong in captivity. Whenever possible, wildlife should be left in the wild. 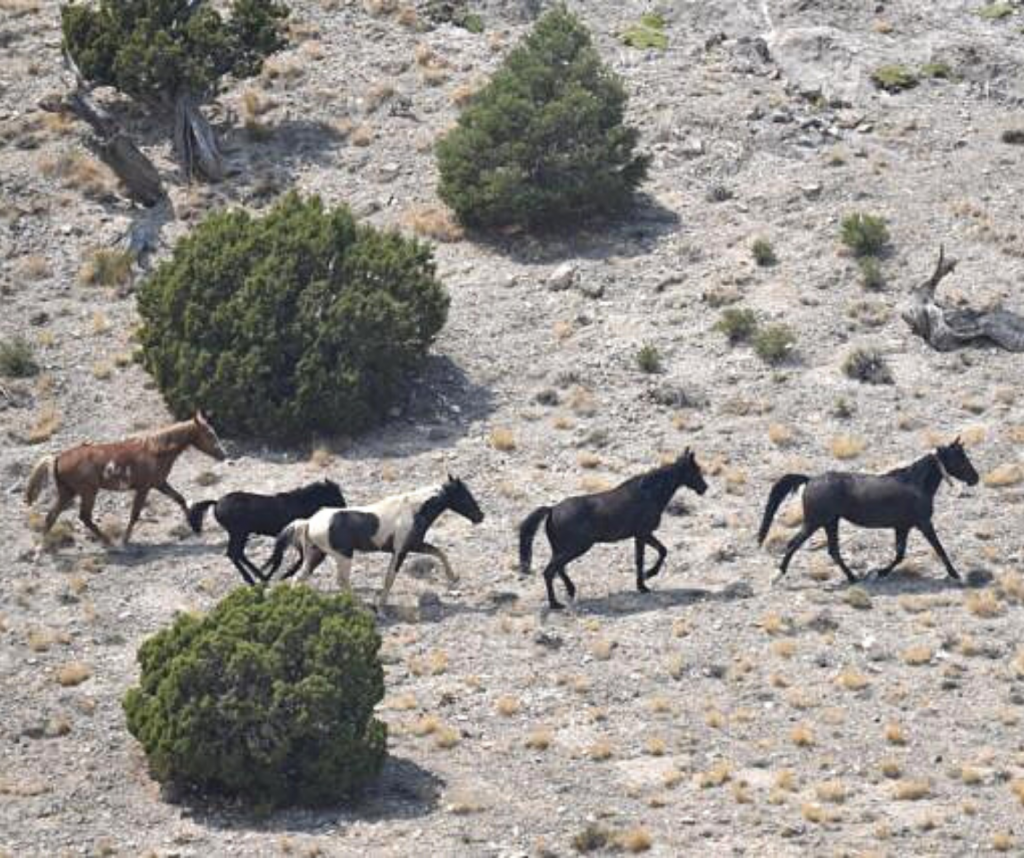 In July 2021, law enforcement officials asked the MSSPA to take in 20 badly neglected horses. These animals had been evidence in an animal cruelty case, though the Springvale, Maine owner was allowed to surrender them without consequence. Four of the horses were mustangs — three mature adults and a filly only a few months old. Since that time, adults Silver, Annie, Sienna, and baby Izzy were at the MSSPA. Once weaned, Izzy quickly began learning all about humans. She loves attention, is clever, and very willing. Prolonged professional efforts to gentle the adults resulted in only limited progress. Silver, Annie, and Sienna were unable to successfully transition to lives as domestic horses. They could not be safely handled for routine health or hoof care. 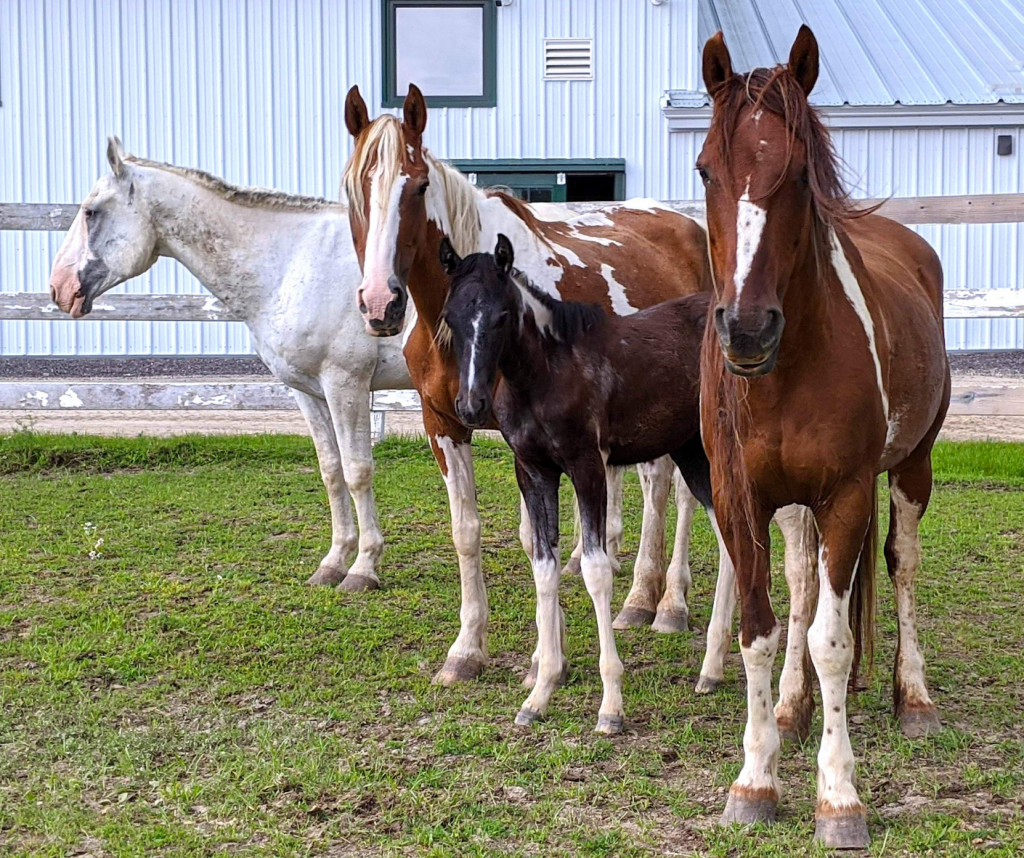 As a result, management at the shelter began exploring better options for the adult mustangs. Miraculously, Skydog Ranch and Sanctuary of Prineville, Oregon has committed to keeping all three adult mustangs at its 9,000-acre wild horse sanctuary for the rest of their lives. Silver, Annie, and Sienna are once again roaming free, safe from gathers or other human exploitation. 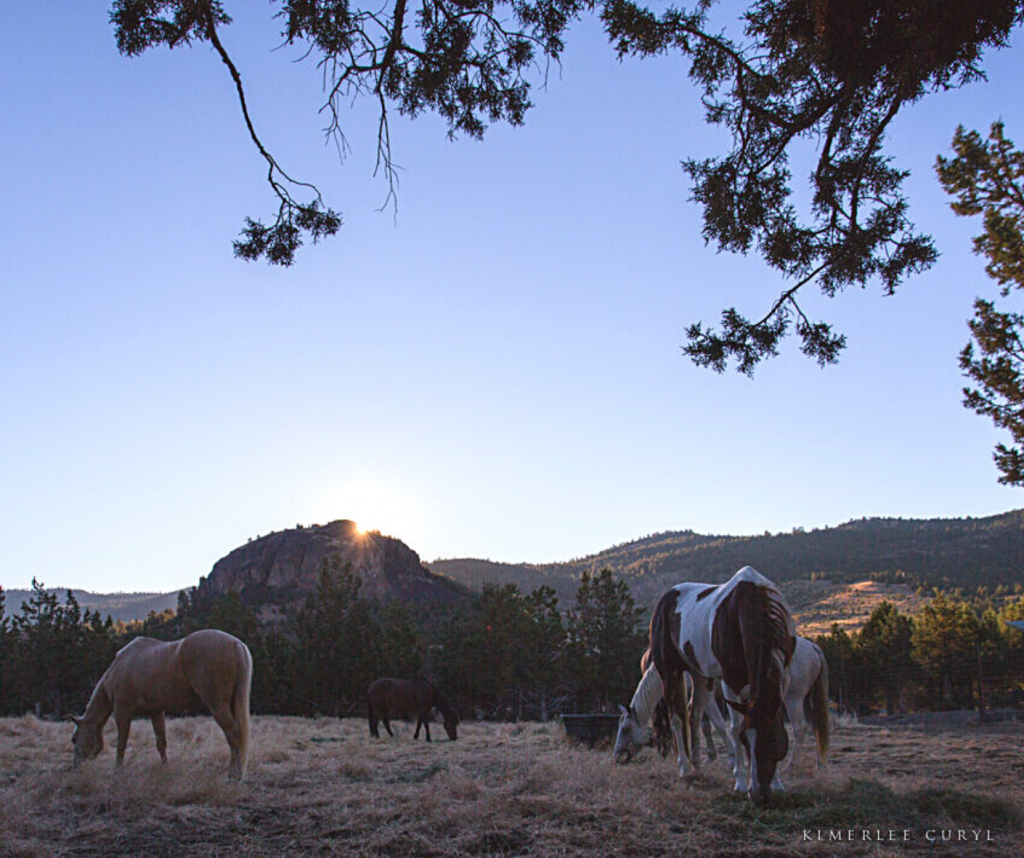 Thank you to Skydog and all those who are helping care for these three and all of America’s mustangs. They symbolize the best of what it means to be truly wild. 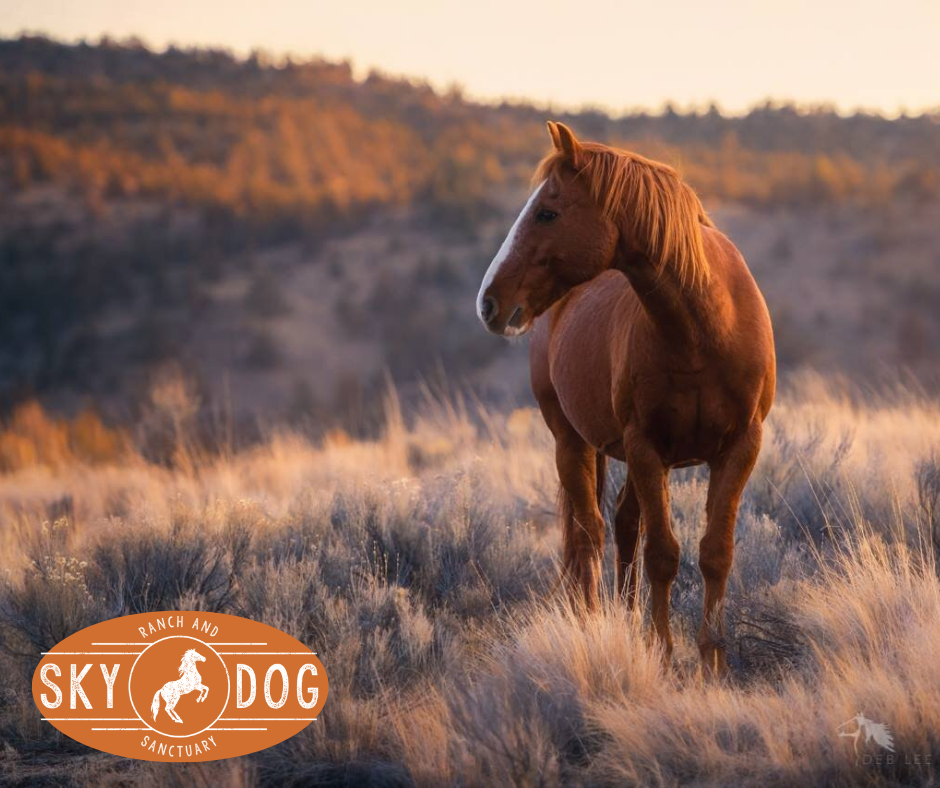 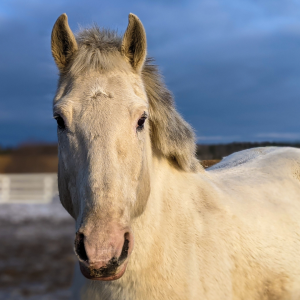 You can take Silver out of the wild but you can’t take the wild out of Silver. A 20-year-old gray mustang, Silver was captured on August 13, 2020 along with Annie and Phoebe in Saylor Creek, Idaho. Silver had lived 18 years as a stallion on the Idaho ranges before he was gathered and gelded, then sold to an abusive owner in Maine. After arriving at the MSSPA shelter along with 19 other neglected horses, Silver finally experienced compassion rather than harm from humans. Silver is still very guarded; he does not like sudden movements or when people approach him quickly. Captivity has caused Silver to close down and he prefers not to be handled at all. Silver cannot safely be led outside an enclosure and care has to be taken with his paddock gates as he sometimes tries to make a bid for freedom. Although dangerous for both Silver and any humans and horses who are nearby, Silver’s desire to be in wide-open spaces is understandable. At Skydog Sanctuary and Ranch, he has 9,000 acres to roam free! Follow #skydogsilver to see updates about him from Skydog Ranch. 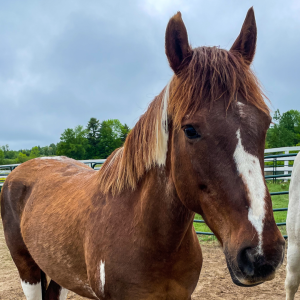 Annie is a stunning 24-year-old pinto mustang mare with an unbroken spirit. Along with Silver and Phoebe, Annie was rounded up from the Saylor Creek range management area in Idaho on August 13, 2020. As an older wild horse, Annie was no longer eligible for the BLM’s adoption program and was instead offered for sale. Sadly, Annie was sold into a terrible situation in Maine. After being seized, along with 19 other horses, by law enforcement in an animal cruelty investigation, Annie came to the MSSPA shelter in July 2021. Having known only cruelty from humans prior to her arrival at the Society, Annie is still reluctant to trust. She is the most challenging of the mustangs to handle and even had to be tranquilized with a dart gun in order to undergo routine health care. Annie is a beautiful, intelligent horse with an indomitable will – she’s the boss mare of the mustang herd. Annie deserves to live the rest of her life in the freedom that is her birthright as an American mustang. At Skydog Sanctuary, she is able to do just that. Follow #skydogannie to see updates about her from Skydog Ranch. 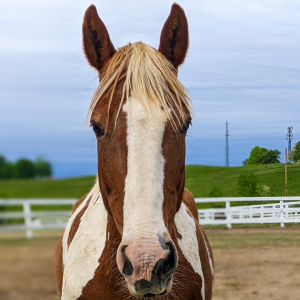 Sienna (previously known as Phoebe) was captured by the BLM from Saylor Creek, Idaho along with Annie and Silver in August 2020. A 19-year-old pinto mustang mare, Sienna gave birth to a beautiful filly, Izzy, while in captivity in an abusive situation in southern Maine. Sienna and Izzy were rescued and brought to the MSSPA with Silver, Annie, and the other members of the Neglected 20 herd. While Izzy is young enough to learn to trust humans, Sienna spent most of her life as a free-roaming wild horse. After her yearlong ordeal beginning with the traumatic roundup in Idaho, Sienna is still timid and difficult to handle safely. It’s heartbreaking that human cruelty almost destroyed this beautiful horse’s sweetness and curiosity. At Skydog Sanctuary‘s Skydog Ranch in Oregon, Sienna has returned to the wild ranges of the West with Annie and Silver, her lifelong herd mates. They have access to routine care specifically designed for wild horses so they can stay healthy while roaming the 9,000 acres of Oregon wilderness. Since there is already a horse named Phoebe at Skydog, her named was changed from Phoebe to Sienna. Follow #skydogsienna to see updates about her from Skydog Ranch.

If you would like to support Silver, Annie, and Sienna, a compassionate gift of any amount is greatly appreciated to support their return to the wild.